Kenny DesOrmeaux, CEO & President
The way a crude oil storage tank is prepared for a human-based cleaning exercise has been essentially the same for the last 200 years. Even five years ago, if you had visited a container tank site in the Permian Basin, you would have noticed personnel in with their orange jumpsuits, lighted helmets, and proper personal protective equipment waiting for the atmosphere of the tank to be tested and approved prior to entry. However, something has changed in the last couple of years. An innovation has arrived in the oil and gas industry to refrain companies from risking human safety while cleaning and performing other tasks. While others have called it ‘the need of the hour,’ for Kenny DesOrmeaux, the CEO and President of Ecoserv, this innovation is the future of automated cleaning.

Why risk the lives of humans when robots can take over and do a particular job? DesOrmeaux is spearheading this innovation by replacing humans with robots by delivering efficient and reliable robotic equipment. Instead of making the suited- up personnel enters the tank, Ecoserv leverages hydraulically-driven crawlers that replace human legs. The robots crawl on a hydraulically-driven track and clean downstream industrial assets such as Aboveground Storage Tanks and many other vessels. The robots are equipped with vacuum equipment as well as articulated robotic arms that can spray high-volumes of water or other cleaning fluids. They have the capability of replicating the human-arm and wrist joint movements in order to crawl inside the tank with the helical chord and move materials in large volumes quicker than a human group. “We have developed the robots in such a way that they can fit the profile of human cleaning and fulfill the mission of men in an infrastructure specifically built for human use,” says DesOrmeaux. The robots can enter the man-ways efficiently, and have the capability to perform more tasks than a human can. Further, with no electric parts needed to power the robots, companies can mitigate the issues of sparking or electrical fires.

The Beginning of the Robotic Future

Although almost a household name in today’s upstream oil and gas assets cleaning industry, Ecoserv started its journey in 1998 when DesOrmeaux founded Offshore Cleaning Systems, an offshore industrial oil and gas supplier of cleaning services in the Gulf of Mexico. After running the business for 16 years, DesOrmeaux realized a grave pain-point existing in the industry. “Regardless of the safety aspect included during the cleaning of storage tanks, the process and the elements involved couldn’t offer the safety that the personnel going inside the tank deserved,” he states.

In an unsafe environment such as the one inside storage tanks, fatalities were still on the rise. Workers were succumbing to the toxic vapors typically present within the confined spaces of a storage tank. Due to various safety concerns, the American Petroleum Institute (API) had mandated the inspection of crude oil storage tanks once in ten years.

During the process of storing crude oil, natural gas liquids and volatile organic compounds, significant volumes of sludge and hazardous air pollutants will collect inside the tanks. Historically, workers in protective gear were deployed into the storage tanks to clean the sludge and other potentially toxic remnants. The manual cleaning process was not only harmful to the people involved but was also extremely time-consuming. The industry was on the lookout for a better and safer alternative to ensure that no human has to ever enter this hazardous and confined space. In 2014, DesOrmeaux purchased the largest environmental service provider company that owned the majority of the market share for Exploration and production waste disposal in the Gulf of Mexico and combined with his previously owned company, created Ecoserv. “Hence, not only did we help clean the oil tanks, but also disposed of the waste generated during that process,” adds DesOrmeaux. 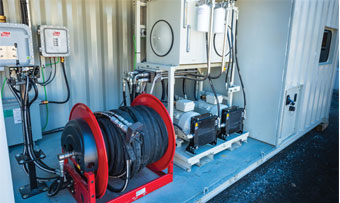 When Ecoserv’s customers demanded a solution that would reduce human confined space entry during the course of tank cleaning, the company developed its line of robotic cleaning technology—that can easily crawl into confined spaces. A few years ago, through a series of events, the company started catering to other downstream industries such as chemical manufacturing and petroleum refineries, which were equally adamant in ensuring that workers should not be subjected to such harsh environments during the tank and vessel cleaning purpose process. This led to the expansion of their business as well as the development of the eco-robotics division of Ecoserv.

Today, Ecoserv offers robotic cleaning systems that deliver the advantages of a safer and smarter way to clean tanks and vessels beginning with profiling the material to be removed, removing it, and then disposing of it. The robotic system can be deployed from the exterior of the tank with the vacuuming and washing equipment mounted on top of the device. The process is carried out much faster without any humans being unnecessarily exposed to harmful environments. Additionally, the manual procedure requires a huge quantity of water, which is used to dilute the sludge to make cleaning easier. On the other hand, by using the bots, companies can minimize or reduce the water-usage by up to25 times in the cleaning process.

Ecoserv’s nexus of robots and automated cleaning tools in combination with their competent staff eliminates confined space entries and ultimately saves lives. The reliable robots that the company designs, builds, and deploys are primarily for cleaning of aboveground storage tanks and many other similar vessels that require the human entry for cleaning. “We are replacing people with machines in hazardous environments, removing people from the line of fire,” states DesOrmeaux. As an additional benefit, the technology is efficient and produces significantly less waste during the cleaning process.
This creates a tremendous logistics cost and risk-benefit for refineries, chemical plants, and nuclear energy facilities that ship waste for disposal or treatment by rail, ship, or barge. At one of their client facilities, a chemical manufacturer had a tank whose floating roof had collapsed settling on the waste inside. While inspecting the damage, the company’s engineers concluded that workers couldn’t enter the tank for cleaning as the roof was highly unstable. Due to the amount of waste that had collected inside the tank and the condition of the roof, the tank remained out-of-service for a long time. The firm approached Ecoserv for assistance, and after assessing the tank, Ecoserv’s bots first stabilized the roof by putting temporary support beams in place. After cleaning the tank and disposing of the waste generated in the process, the bots—utilizing hydraulic saws—cut the damaged parts of the roof into small bits and then carried them out safely. DesOrmeaux adds, “We realized that apart from cleaning and washing confined spaces, our robotic tools can be deployed in various emergencies outside the realm of what they were originally intended for.”

Keeping the Pace with the Robotics Industry

As a provider of cleaning services to the oil and gas, and downstream industrial markets, Ecoserv supports diverse cultures in many geographical locations, including both inland and offshore. It is imperative for the company to be able to transparently provide strong resources that allow connection with vendors and clients with networking solutions for the sharing of standardized metrics, regulatory expectations, and company agendas. To this end, Ecoserv has maintained connections with identified affiliations such as ISNetworld, PEC Premier, and Avetta. While these memberships promote a transparent business model for Ecoserv’s current client base, they also allow a continued association with potential clients who require a safe and reliable service provider. Further, the memberships offer participation in monitoring organizations for regulatory compliance and operational qualifications, and also strengthens Ecoserv’s associations with customers and industry associates by offering an outreach network of information sharing.

"We are replacing people with machines in hazardous environment, removing people from the line of fire"

Ecoserv has carved a unique niche for itself and aims to take its innovation to the next level in the future. “We are presently tripling the number of advanced tools and designs that we produce now,” states DesOrmeaux. The majority of the tanks in the U.S. are being cleaned by a handful of companies, and Ecoserv will be partnering with these companies to supply robotic technology to them, ensuring a safer and secure environment for the cleaning space.

In the last six months, Ecoserv has also completed the construction of its manufacturing facility through which the company aims to develop three complete robotic systems quarterly for the foreseeable future. “We expect the number of tanks being cleaned with robotics across different industries to increase exponentially, and we are well-positioned to meet the specific demands revolving around this growth,” mentions DesOrmeaux. Further, with the change in market demand for safety and efficiency in tank cleaning, along with the Occupational Safety and Health Administration (OSHA) creating new laws and regulations, providing an alternative that safeguards the environment and protects humans from these toxic spaces is paramount. Ecoserv seems to be poised with its robotic systems and cleaning technology to provide that alternative.

Previous Next
Tweets by CIOApplications
This content is copyright protected