From Robotics to Big Data, What the Future Holds for Manufacturing
Karl Rosenblum, Head of Global Capacity and Risk Strategy, Alcon

A key element of any successful robot is the collection of sensors and communications networks that enable the control system to accurately monitor the spatial orientation of its mechanical components–arms, grippers, actuators etc.

The position sensors built into these systems must provide high levels of accuracy to enable the precise positioning of parts or tools. They must also have excellent dynamic response to provide the control system with real-time feedback of rapidly moving components. Reliability is a must, of course, even when the robot operates in a harsh, wet, dirty or hot environment. And, they should be reasonably inexpensive, especially for smaller robots where lower purchase and operating cost is a key competitive feature. 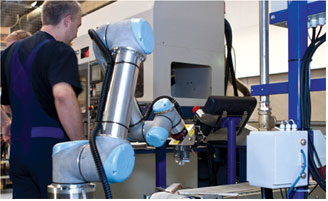 Until recently, the ‘gold standard’ for rotary encoders for robots was instruments based on optical measurement techniques. These devices are built around a ‘code disk’: a glass or plastic disk mounted on the encoder’s shaft with a concentric pattern of transparent and opaque areas printed on its surface. A light source is located on one side of the disk and an array of photocells on the other. As the disk rotates, a coded pattern of light will fall on the photocells, generating a digital ‘word’ representing the absolute angular position. Optical encoders have excellent dynamic response and resolution. However, to achieve high levels of accuracy, the code disk needs to have a relatively large diameter. Optical encoders can also be sensitive to humidity (which can fog the code disk) and mechanical shock and vibration loads.

Reliability is a must, of course, even when the robot operates in a harsh, wet, dirty or hot environment

This can limit their suitability for harsh environments. Optical encoders also require extremely tight tolerances with respect to the alignment between the code disk and the photocell array, which makes them relatively costly. 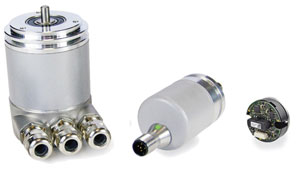 Magnetic encoders were introduced a little over a decade ago as an alternative to optical encoders. They are more compact, less susceptible to dust and moisture and more tolerant of shock and vibration loads. Magnetic encoders have a small permanent magnet mounted on the rotating shaft, with Hall-effect sensors on the body of the encoder to measure the position of the magnet. The Hall-effect sensors were originally developed for the automotive industry for ABS and traction control systems. In their original form, the Hall-effect sensors didn’t have the accuracy required for precision robot controls. However, by combining the output of several Hall-effect sensors through sophisticated signal processing algorithms, POSITAL-FRABA has achieved resolutions as high as 17-bits, with accuracies and jitter good enough for closed loop control of high-speed dynamic control systems.

Traditionally, most encoders have been sold as self-contained units with their own housing, shaft and shaft bearing. Kit encoders are basically the core measurement elements of magnetic encoders, offered as separate components. In this form, they can be easily installed inside the casings of motors or other machines, saving both space and cost. These rotation sensors can provide both commutation signals (essential for brushless DC motors) and accurate rotary position measurements.

All of the sensors, drives, (motors) and actuators that make up a robot system need to communicate with the controller hardware. Simple point-to-point wiring can be adequate for basic robots, but as the number of connections increases, it becomes increasingly attractive to use a network-style communications system. So-called fieldbus systems use a shared wiring backbone that simplifies wiring and controller interfaces. Fieldbus technologies date from latter decades of the last century and were designed for individual machines, work cells or small factories with a limited number of nodes.

Ethernet technology has been adapted for industrial use. It is more scalable than fieldbus, offering opportunities for higher levels of system integration across the entire factory complex. A limitation or ‘classical’ Ethernet is that the instantaneous delivery of data packets cannot be guaranteed. This can be a serious problem for industrial processes where potentially dangerous situations need to be identified and responded to in near real-time. Several enhanced Ethernet variants have been developed for industrial use that provides priority routing for critical alarm messages.

Sensors provide robots (and many other ‘smart’ machines) with an important element of ‘awareness’ of their position in space and of their relationship to any objects or people who share this space. As sensors become more capable–more accurate, reliable and sensitive, we will see them enabling more versatile and competent automatic machines. Much of the enhanced capabilities are coming about through a combination of faster and more powerful hardware (especially microcontrollers) and more intelligent software. The future is exciting–and coming at us very quickly!

Check This Out - Applied Technology Review